5 Most Common Myths Busted About Dementia 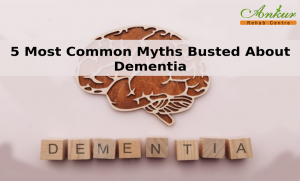 Dementia is a generic expression for memory loss, language, problem-solving, and various thinking abilities that are serious enough to intervene with everyday living. One common cause of dementia is Alzheimer’s.

Dementia is not a singular disease but a general term — like heart disease — that comprises a broad range of specific medical conditions, including Alzheimer’s.

There are several myths and misconceptions about Alzheimer’s disease and dementia overflow – like what it is, how it affects, who gets it, etc. All such myths abide people from understanding the disease and supporting those affected.

Even people avoid reaching the Psychiatric or Best De-Addiction Centre in India as they are surrounded by myths like it can not be treatable.

Let’s bust some of the common myths…

Truth- It is common to see that most people with dementia are seniors, but some are also seen suffering from dementia in their 30s.

The usual age of dementia onset does occur in the older years. But, in the cases of early-onset dementia, this age may be dramatically reduced. If dementia occurs before reaching old age, there are high chances that it is genetic, and in such cases, dementia age of onset may lower to a person’s mid-30s.

Myth #2 – If a family member has dementia, I will have it, too

Truth: As mentioned above, the most common type of dementia is Alzheimer’s disease. And genetics can be responsible for the development of Alzheimer’s disease. As lifestyle and environmental factors also contribute to its development, it is likely to be only one of the many factors that play a role. But again, it is not compulsory that if any family member of yours has dementia, you will have to.

Myth #3 – Dementia is ever preventable

Truth -It is, sadly is untrue. There are possible factors that can significantly reduce the risk of certain types of dementia developing or delay their onset but can not prevent it.

For instance, we have listed 12 factors that can increase the risk of dementia. Such as:

Even if some of the mentioned factors are more difficult to modify than others, working on controlling or changing a few of them might assist decrease the chance of developing dementia.

Truth – It is another most common and frequent myth associated with dementia. It is the belief of many people that those living with dementia cannot communicate effectively or are not conscious about what is happening nearby them. However, the part of the brain that deals with awareness is separate from the area that deals with communication. It says most sufferers have thoughts to communicate, even when they struggle to relay these.

Myth #5- If one forget things frequently, it must be Alzheimer’s disease

Truth – Of course, memory is typically one of the first signs of Alzheimer’s, but not all memory problems signify the disease. Mostly forgetfulness is expected as we grow.

You can reach an expert to determine whether the memory changes are regular or a sign of something more severe.

If you or someone in your connection needs treatment for dementia and a substance use disorder, we at Ankur Rehab Centre, Best Rehab Centre in India, can help. Schedule an appointment and find out more about treatment for co-occurring disorders. Reach one of our helpful representatives today!