Dementia: A Complete Guide to Its Subtle Signs

Dementia isn’t actually a disease but a group of symptoms caused by several other conditions. As estimated, over 50 million people are living with dementia worldwide.

In general, symptoms of dementia may improve with treatment. But some of the diseases that cause dementia aren’t treatable.

Let’s learn more about the syndrome and when to visit a Mental Health Rehabilitation Center for help.

Dementia is a broad term that explains a loss of memory, thinking ability, logical reasoning, attention, and other mental abilities. These variations are critical enough to intervene with occupational or social functioning.

As mentioned above, most things can cause dementia. When the parts of your brain used for memory, language, learning, and decision-making are damaged or diseased, it happens.

Dementia tends to develop mostly in elderly people; hence it is considered a late-life disease.

Reports say, around 5%-8% of adults over age 65 have some form of dementia. And this percentage doubles every 5 years. Moreover, as many as half of the people have some dementia in their 80s.

Some of the most common causes of dementia are degenerative neurological diseases and vascular disorders.

Some common reversible causes of dementia are:

There is some lifestyle and physical factors that can heighten your possibilities of dementia are : 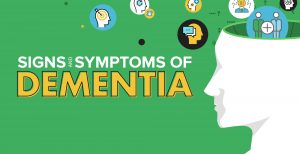 Based on the underlying causes, like the person’s cognitive functioning before becoming ill or other health conditions, affect each person differently. Here are the three stages through which dementia’s signs and symptoms can be understood.

Early-stage: Most often, the early stage of dementia is overlooked, as the onset is regular. The symptoms involve:

Middle stage: The signs and symptoms become clearer when dementia progresses to the middle stage. They are:

Late-stage: One of near-total dependence and inactivity is the late stage of dementia. Memory disturbances are severe, and the physical symptoms and signs become apparent and may involve:

When should you see your doctor?

If you or your friends and family see changes in the following aspects associated with you, make an appointment with your doctor:

If you’re worried about your or your loved one’s forgetfulness and don’t know any neurologist yet, you can reach us at Ankur Rehab Centre, a leading Psychiatric Rehabilitation Centre. With proper treatment, we can help you slow the progression of the disease and maintain mental function.

At the Best Rehab Centre in India, we offer individualized treatment to patients and make sure they get what they need the very moment they visit us.

Get in touch for more details!